Alright, i’m using Asesprite version 12.25x64 on Windows 10, and it’s causing random crashes. (I bought it through steam, updated it recently but the crashes occurred on the previous version. )
I don’t know why, nor what causes the crash, all i know is that in task manager it’s reporting incredibly high GPU usage if i move the cursor around in the canvas on any file
And by crash, i don’t mean the app crashes, it straight up crashes my computer.
What’s making it do this? Can i fix it?

In terms of other ‘symptoms’ associated with a crash event-
the crash will start with asesprite and the taskbar locking up completely, the cursor can still move during this.
a few moments later, the cursor and any audio being played will lock up, presumably if i’d wait long enough, it’d BSOD and restart

It honestly sounds like you have some serious hardware issues going on right now. I’d backup everything you don’t want to lose ASAP. Odds are either your GPU, Harddrive, or RAM are about to die.

In any case I wouldn’t think there’s an crash dump file generated if it’s a BSOD crash so even if it’s Aseprite doing something, which I highly doubt, it would be hard to see what is happening. But maybe there is one, so you can type this into the address bar in the file explorer to access the Aseprite appdata folder. 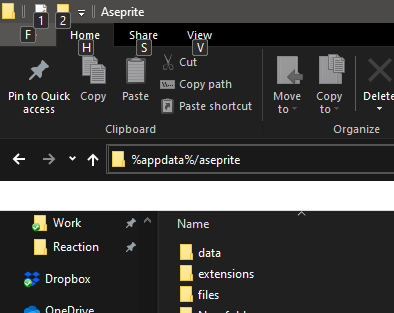 If you have a file called Aseprite-Crash-1.2.25-x64.dmp (or whichever Aseprite version you are currently using) that’s created recently you can send it to support@aseprite.org and just copy paste your forum post to explain what’s happening and maybe Dave can get some idea.

Does your computer suffer from random BSODs in other cases as well?

No, actually, it’s specifically in this one singular use-case.