Hi, I installed Aseprite via Steam on my Pop! OS (v 22.04) machine and ran into this issue. Since Pop is Ubuntu based I assumed it would work just the same, however, I am new to Linux so perhaps I was mistaken.

My problem is that the .aseprite/.ase format is not recognised and is categorised instead as “application/octet-stream”. There is no option to open the Aseprite file format with Aseprite unless changing the Aseprite.desktop file to contain a direct shortcut to the executable. However, this still doesn’t fix the issue with Aseprite format recognition as this merely changes the default app for “application/octet-stream” files to Aseprite. It also means there is no Aseprite file icon.

I have included two screenshots; The first shows what the files look like in the Files manager (after I have changed the Exec path so that Aseprite appears as a choice when selecting an application to open the file with), and the second shows the .desktop file (the blank space in the path is where my username is).

I appreciate any help. Thanks. 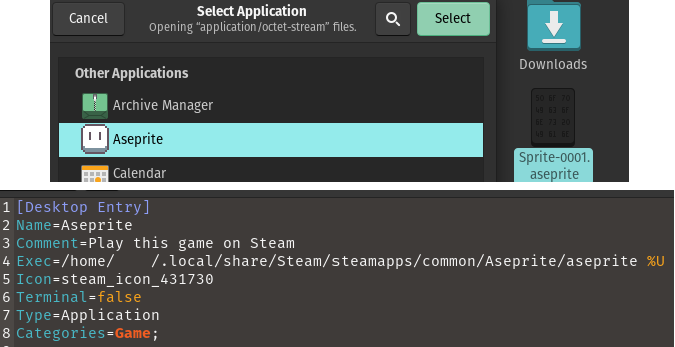 What you are trying to do is called adding custom mime types. Check out the following resources:

(This one shows how to add multiple file extensions to one mime type.)

But we’re not distributing it with the .deb packages, maybe we could start doing so. Where should be this file installed (e.g. on Debian/Ubuntu-like distros)?

Many thanks for pointing me in the right direction, xtendera!

Thanks, dacap. I used the file you provided and think I am on the right track now.
I have managed to get the Aseprite format to be recognised as “Aseprite Pixel Art” files and have set the default app for these files to Aseprite. However, I am still having trouble getting the file icon to appear, so I will fiddle around some more and update this post with the full solution after I have everything worked out.

But we’re not distributing it with the .deb packages, maybe we could start doing so. Where should be this file installed (e.g. on Debian/Ubuntu-like distros)?

I finally got everything working! I was running in circles there for a while but I managed to narrow it down to a few steps.

Changing the .desktop file to contain a direct shortcut to the executable as seen in my original post is not necessary since you no longer need to select Aseprite from the ‘Select Application’ window, but for me it makes the program launch instantaneously rather than taking a few seconds and perhaps there are some other benefits.

Also, I downloaded the trial version of Aseprite directly from the website and the steps for that version are the same, with the exception that you don’t need to touch the .desktop file at all. The file icon is located at /usr/share/aseprite/data/icons/doc.ico.