My current version of Aseprite 1.2.16.2-x64
I was not sure if this is a feature or not so I will be continuing on as if it is not yet a feature.

A feature for Aseprite where you can define a tileset which will update all linked images using the tileset.

Here is an example I quickly created to help explain (very lazy tilesets incoming):
The grid feature is kept on for clarity

Imagine you create a simple dungeon tileset (as seen below), 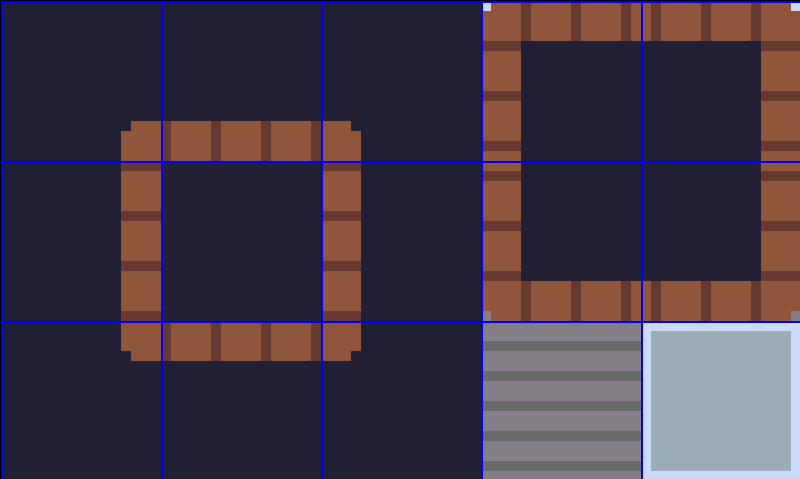 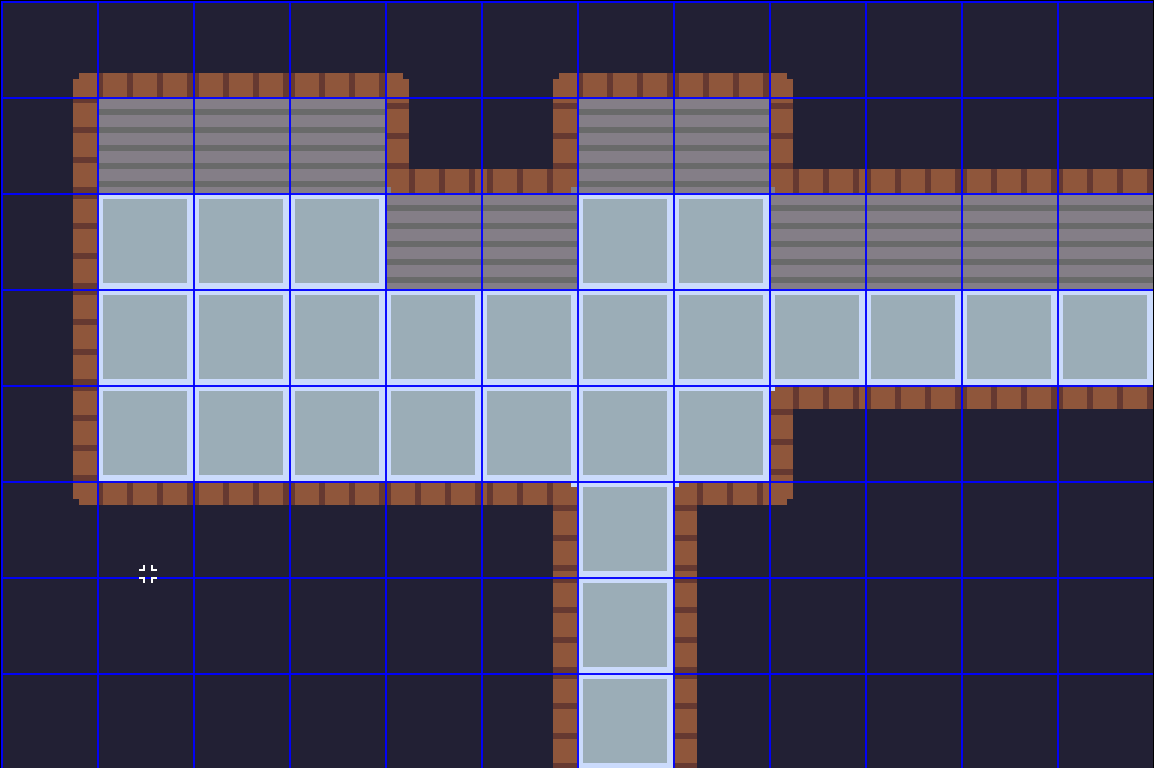 Dungeon Version 11154×768 2.88 KB
later you decide you want to make some changes to the tileset and want to see the “mock-up example” again. The problem with this is the example would need to be remade from scratch again which can be time consuming. What I would like to propose is a system that can be used to automate this issue.

Imagine the tileset is updated to this: 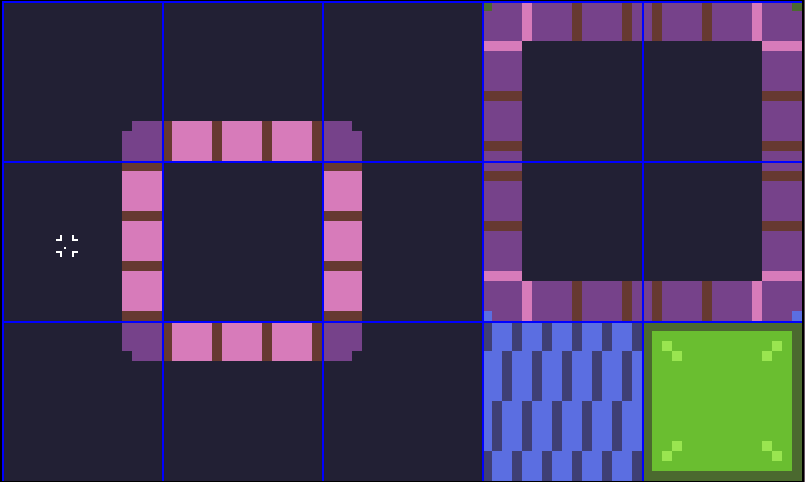 instead of needing to recreate the example it would be automatically updated to this: 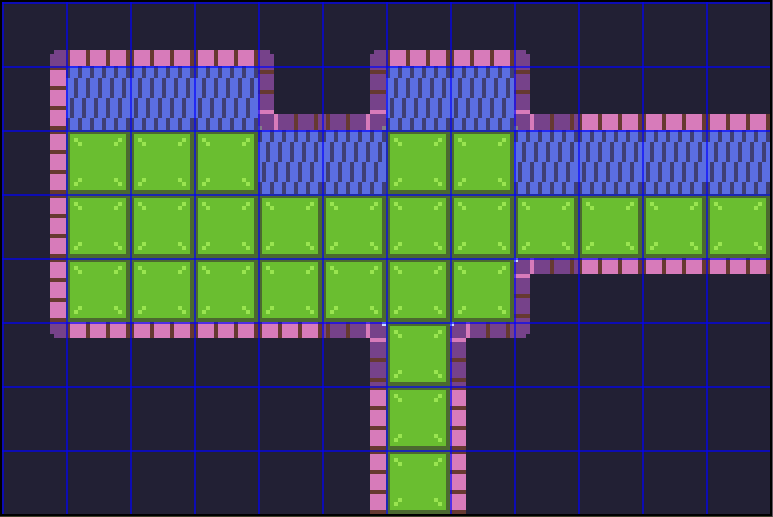 I’m not going to say it looks good but i wanted to make the changes clear.

Wasn’t sure whether it is a feature or not as I haven’t found any articles on the topic so I am putting it under possible #features.

If you have any questions or comments please tell me and I will be happy to answer.

That would be a great idea.

But while we wait for this functionality, let me suggest an external software to solve your problem meanwhile. There’s this small peace of software like Godot Game Engine. It’s super easy to set up since you don’t even have to install it. Setting up a tile-set and maybe even auto-tile has lot of tutorials about it. It doesn’t require you to know nor do any coding to set that up. Each tile can be separate file and when you edit any of them with Aseprite, the engine should reimport it on the fly. You can create mock-up level to see how your tiles are working together and see your changes real-time. When you add tiles then you only have to edit the tile-set again in the editor.

I would have suggested you Tiled, but it turns out that adding tiles can be quite a nuisance since they should be in a sprite-sheet and editing it can jumble up the entire tile-set. But you could look into it as well.

I think Pyxel Edit is worth mentioning as well, as it has a focus on tile editing and does it very well. It’s by far my favourite tool for tileset creation, despite its limitations in other areas.

Edits to tiles take effect immediately across all instances, you can flip tiles when placing them, tools can be set to only work within tile boundaries, you can rearrange your tile palette freely, and probably a bunch of other things I take for granted :'D I’ve been largely ignoring Aseprite’s tile tool news because I already have Pyxel Edit and it does the task so well.

(I should mention that due to how Pyxel Edit does animation, you can’t preview animated tiles within the program, as each document is either tiled or animated, not both. Each frame has to be treated as a separate tile and tested externally. I use Tiled for that task, since it’s what I use for my maps anyway.)

The idea of reusable assets gets discussed and requested a lot. There’s actually a network of dozens of similar requests, linked to each other. It’s a very anticipated feature, but it probably will / is taking a lot of work, in terms of coding, new GUI, implementation etc.

Anyway, in addition to what others have suggested, this can be done quite well in Adobe Photoshop if you have access to it. If you convert a tile to a Smart Object and duplicate it around, you can go to Layer > Smart Objects > Edit Contents. Your tile opens in a separate tab. After you do some edits and press ⌘S / Ctrl+S, every instance of that Smart object gets updated.

Update: Good news if you don’t have Photoshop. There’s a free clone of Photoshop that runs in your browser – http://photopea.com – and it has this feature as well. You can double–click the icon of a Smart Object (which you have duplicated using ctrl+J) to open it in a separate tab. All instances should also update after you click ctrl+S.

This feature is already a work in progress for v1.3, more info here:

UI design and main goals of the tilemap feature: Everything related to tilemaps must be hidden until we create a new...

And there are some previews: 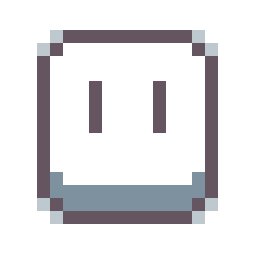 Sneak peek of the new tilemap editor on Aseprite v1.3, not yet released 👀 https://t.co/DLI3J5atDw

Not yet ready, but we are making progress with the next #aseprite, now we can drag & drop tiles and remap them just like with colors https://t.co/IBj8eyw3kx
3 Likes