Checking up on the batch sprite command bug

I just wanted to check up on if this issue was solved, both the commands that weren’t working, and the folder feature.

I noticed you seem more active here then on github, so I’d take the conversation here. I however will link you the topic I’m talking about

Exporting to folders and creating them if not existing.

Hi @Dairnon, did you try with the latest beta version (v1.2-beta12)? Could you please send me the .ase/.aseprite files, the exact command line you are using, what do you get in result and what do you expect? 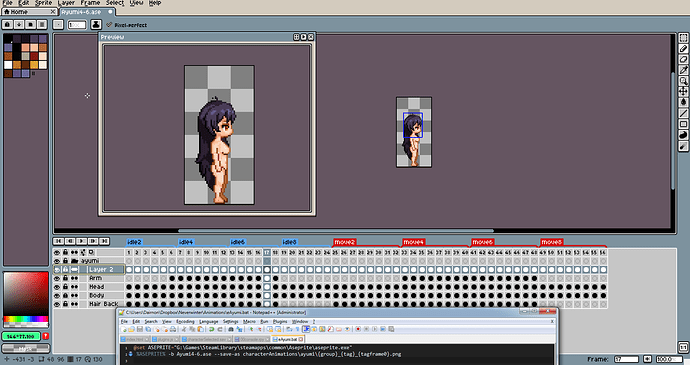 I’d also ideally like to create the folder to hold all the exported sprites using the group name, rather then having to make it myself, then defining it in the export (charactersAnimations\ayumi) i want (characterAnimations{group}) If the group exists, use it, else create a new one.

Also I was trying to find a command to just export a group… I don’t think that exists. I’d like to have all animations for a sprite stored in one file in different groups. Group for base sprite, then each equipment or alteration version, then create batch commands to export each group.

Then I could export split layers for each part of the outfit if needed or an entire group
%ASEPRITE% -b Ayumi4-6.ase --group-ayumi --split-layers characterAnimations\ayumi{group}{tag}{tagframe0}.png

(Exports split layers of only that group)

What does that mean? do you want to export the group or each layer separately?

From what I see in your commands I think you are confusing group with layers, if you specify {group} only the ayumi layer will be exported (which is a group), if you specify {layer}, all children layers should be exported. E.g. Using --save-as {group}_{layer}.gif you will get:

I’m talking about the naming scheme for sprites. {tag}_{tagframe0}. I’ve gotten it to export and name the sprite that way.

However if I do {group}{tag}{tagframe0} it doesn’t work. I instead have to do ayumi_{tag}_{tagframe0}. Not that its entirely a big issue. What matters to me is the ability to specify a group, and only export that group.

I want ayumi_idle2_0 instead of just idle2_0

I just wanna export a specific group. (or all groups)
So if I had an ayumi group, everything within that ayumi group would be combined and exported as if its one thing.

Same for equipment. If I had an equipment group called outfit, I’d like to export everything inside that outfit group combined.

That way the only thing I need to change is the part after --group, unless there is already a way to do it this way.

Ok, I think I got it. You cannot specify --layer GroupName and {group} in the filename to export just one group because if {group} is given all groups will be exported anyway.

A possible fix to your issue would be doing something like this (using –layer option to make the group visible):

To export each group separately (and use "{group}_{tag}{tagframe0}.png" only when you want to export all groups).

This will work for all groups and layers too right?

Ill test it and see if I run into other problems. It still be nice to allow folders that don’t yet exist in the path I want to automatically be created.