I feel like it would be really useful to have a brush or an option to put a dither pattern on any brush or fill pattern, instead of having to make a brush pattern for each dither pattern that you might use. I suggest this because this is inspired by the old school oekaki days of PaintBBS which had a dedicated dither tool called halftones, where the “opacity” of the tool set the dither pattern you used.
you could quickly and easily do something like this in paint BBS, for example - 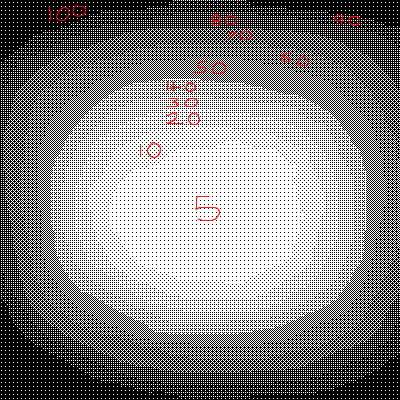 imagine having to put EACH ONE of those patterns into the brush settings just to do the same thing! you could also pick any brush size with them. To overlay the dither pattern on any brush or fill you use would be so useful and make using dither patterns on larger pictures so much faster and easier.
i can’t show a video of how it works, sadly, because PaintBBS is an ANCIENT java applet and modern computers can’t run it without enabling literally every dangerous java option to run untrusted applets.

Here’s a gif demonstration of a dither brush in Photoshop to help convey what OP wants. In this gif there’s pressure sensitivity that allows a single stroke to go through multiple kinds of dithering, which is very useful, but even just being able to select the density with a slider would be nice.

What kind of witchcraft is this? O_o I didn’t even know that you could have dither brushes with pressure sensitivity in Photoshop, that’s great!

I only knew this method for dithering while drawing normally in Photoshop: http://danfessler.com/blog/hd-index-painting-in-photoshop

Thanks for the info @eishiya!

I’ll definitely have a look at those brushes, is there any link you recommend?
Edit: I have found this one: aP's Dither Brushes by abductedPlatypus (it seems to work just fine ^_^)

And yeah, this would be an amazing feature for Aseprite!!

is there any link you recommend?

I made mine using the method described here: https://twitter.com/DanFessler/status/913682372083695616 (Of course it’s another Dan Fessler post, who else xP)
The exact method described only works in newer versions of Photoshop, but one of the replies is a tweet from me that replicates the effect in older versions.

I think this already exist is this it? 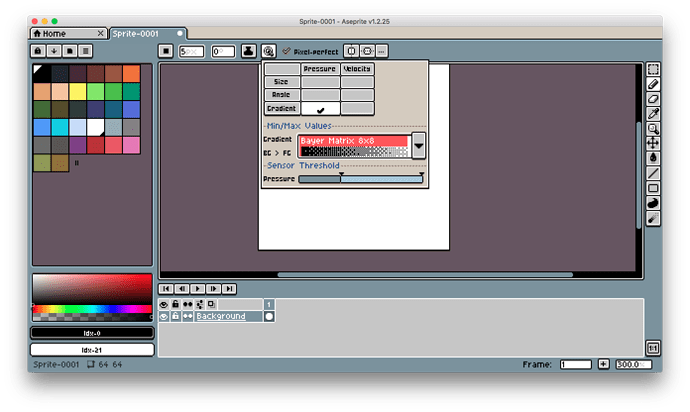 This thread was made almost two years ago, before these features were implemented. But yes, that’s the feature :]

yeh but what about those who dont have pressure tablets, just being able to lijnk dither to pressure and use mouse would be a great addition, for that i mean something like linking direcly opacity to dither via brush setting maybe them same thing the higher the nunber the denser the number is. would be nice.

Check this video out: Speed up Dithering painting in Aseprite. #PixelArt - YouTube
It explains how to make your own dithering brushes, which sounds like the thing you want to do.

not exacly but its a workaround for now

What you want is exactly what dither brushes are meant for, and using a specific gradient position is the workaround, the dither gradient feature is literally not designed for this, it’s meant for keeping gradients to a set palette, not for painting a specific dither.

However, it’s a damn convenient workaround (especially since adding matrices is a bigger pain than it ought to be), and since you can set min/max for angle and size, I don’t see why the same shouldn’t be possible for dithers. It would even be convenient when using a tablet for setting a subrange of the gradient to use (useful mostly with dithers rather than regular gradients).

Also, for inputs without pressure, there’s the velocity option, which lets you fake pressure with the speed of your cursor. It’s not bad, but it’s very inconvenient for what you need, since you’re looking to use a specific value, and velocity is harder to control precisely than pressure.

Both? I’m agreeing that this would be a good feature to have, but I disagree with your reasoning about it :]