I don’t know if many people care at all, but I would like to see an option where i select part of a picture and export only that part without making a new canvas.

Hi @cihy, add this feature to and old issue about a File > Export… menu, I think the option could be in File > Save Copy As too.

This is a feature I’d probably use alot. My current workflow is:
Marquee Tool [select] -
Sprite -> Crop -
File -> Export Spritesheet
Ctrl + Z [to undo the cropping]

Incredibly useful if there could be a general checkbox (perhaps like Best fit for texture) in the Export windows or something.

File > Save As and File > Export Sprite Sheet should have an option to export only the selected part of...

This feature would be great, it will make slicing up my characters to import into Spine so much easier. Maybe also with the option to export current layer only or collapsed layers.

Exporting only one layer or only visible layers is already possible. 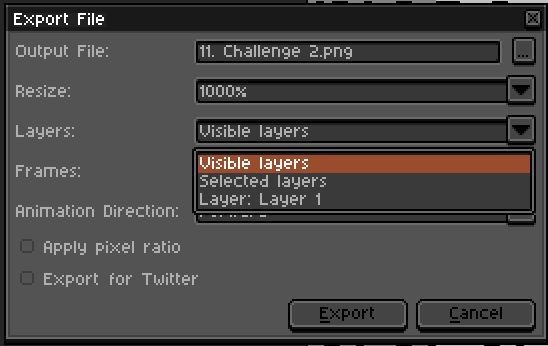 i want to revive this, it relly would be useful to be able to export only the current selection without having to do any workarounds

I consider this an extra (minor enhancement). Until you do a lot of exports every day this way. In which case you should really think about optimizing your workflow.

when you work by atlases its a needed feature, i always need to selct create a new canvas from selection in the edit tab and them i can export, its minor but it would be relly amazing

If you’re working with atlases, you shouldn’t need to export anything but the whole atlas more than once in a blue moon, no? The point of an atlas is that you have everything in one texture. I think Aseprite’s not actually designed to work that way, it seems meant to focus on one series of animations at a time, that you then export to an atlas using the Export Sprite Sheet feature. However, with grids and slices it supports working on atlases fairly well even if not intentionally, so I don’t see why it shouldn’t have features to make that easier :]

Another use-case for exporting selections is to make it easier to share parts of your work with other people. Sometimes you don’t want to spoil the whole work, or want to show just the finished parts, or you have a lot of overdraw for technical reasons, and just want to export part of the work. Being able to just select the relevant part for export would be a great time saver.

It’s definitely a QoL feature, but QoL is the main thing that makes Aseprite better than a lot of other pixel art software xP

The situations I most frequently use the suggested feature is when I have multiple components in the same file. Specifically having different layers for legs, arms, torso, head, effects etc. I want to be able to optimize space in my spritesheets, so I generally crop each component prior to export and there’s where this feature would save me some time.

It’s worth noting that there are numerous variations in workflows out there that works differently for different situations. There isn’t one ultimate workflow for all situations. There are always bottlenecks to choose between and this workflow presented me with the least troublesome one. A feature like this would remove that bottleneck entirely.

I want to be able to optimize space in my spritesheets, so I generally crop each component prior to export and there’s where this feature would save me some time.

I think slices should work well for this. They’ll stick around as you work, so you don’t have to keep re-selecting. I’m not sure, but I think they can even be modified across frames, if you want to crop things differently from frame to frame.

Edit: If you organize things per-layer and across frames, Aseprite can also take care of cropping and packing your sprite sheet for you.

by working in atlases i mean, likem y workflow consists of making something in a bigger canvas so i have space to work with and make variations and changes till im saisfied, and them i need to export off but the one thing alone, most of my thigns are done in atlas this way, and i cannot be the only one, also even if aseprite is more focused on animations in one piece its cannot be that complex to add most programs have something like that 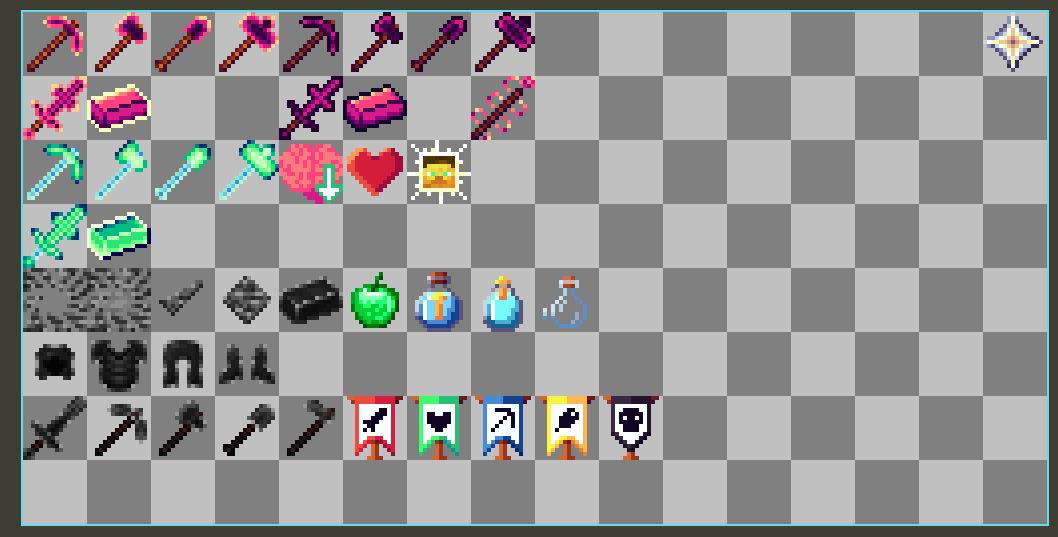 image1058×537 8.67 KB
i layed out everything and them i need to select the thing i want and go to edit>create new sprite from selction and them i can export and after i need to clean up my recents file too, to keep everything organized

a export current selection would MASSIVELY improve this kind of workflow

also i mainly do that because working on 16x16 canvases are just annoyiing, and kind claustrophobic if you know what i mean

As I wrote above: why not use slices? I’ve done sprite work organized exactly like this and slices were perfect. You can automatically export them into separate images, as a batch. Last I did this, it required using the CLI, but I just saved the command as a .bat to run whenever I needed it.

You use the Slice Tool to define your slices.

It’s not an outside script as such, it’s using Aseprite’s CLI, a .bat file is just a way to save the command for later reuse instead of typing it every time. The only reason it’s necessary to use the CLI is because the GUI export dialogue is missing many features Aseprite actually has - the CLI docs are actually linked right next to Exporting, because they fill out Aseprite’s exporting feature set.

Hopefully after 1.3 is done, we might see more of these features added to the GUI.

FYI We just added selection export in super-export extension. You can export selected portion of an image and upscale it at the same time, even over 1000%.