Tldr: Using CLI --save-as with {slices} in .ico endformat will make every ico Icon the full spritesheet canvas size and not the individual slice region sizes.

Context: I have been making custom folder icons for windows 10. The work I planned was only around 10 icons drawn on their own dedicated layer within an exact canvas size. This would had made manually exporting to .ico easy enough by hiding/revealing the appropriate layers… But I kept creating more icons and after the 25th icon I decided to arrange them on a large canvas like a sprite sheet for simplicity and tracking sake. Now I am over 200 icons in everything has been appropriatly named and such.

Using CLI exporting to .png with --split-slices works perfectly however when attempting with .ico as the end format; the slice regions no longer work. Instead of 32x32 .ico files I get full canvas sized 448x608 icons with every layer shown as if I had not used any slice regions. Not good. 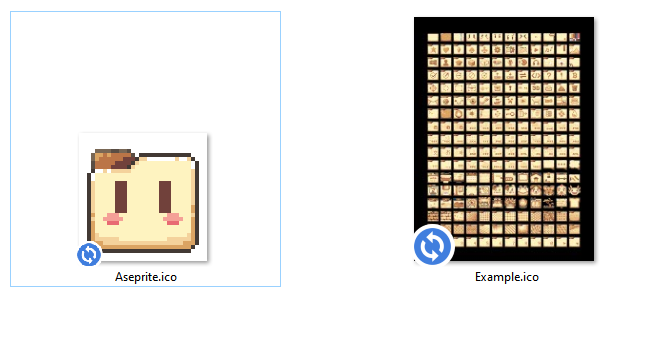 I have done a test of seperating some icons to their own layers and collapsing themselves over a 32x32 canvas much like my proliminary work and exporting with --split-layers, it works but that means I lose the benefits of a sprite sheet and I’ll have to manually move and make layers for 200+ icons.

Does anyone know if this is broken or if im doing this wrong? Has anyone done something similar and can share a better method to this? Thanks!

hm, if it works with png but not with ico, it might be a bug.
as a workaround you can export the slices to pngs and then batch convert to ico in xnview.

I may need to repost this as a bug report then… but I tried xnview and it works very well and is a great piece of kit, it might just replace what I normally use! Thanks for the reccomendation!

you may just change the category of this thread

Hey there, thank you for reporting this, I’ve created Exporting Individual slice regions as .ico files result in full canvas size icons · Issue #3471 · aseprite/aseprite · GitHub to keep track of it.