Probably one of the features I find myself missing the most from other pixel art applications is a way to flip the current brush, or rotate it by 90 degrees. While of limited/no use for circle brushes, this would function mainly with custom brushes and allow flipping the Square/Line brushes.

While the basic Square and Line brush types have a Brush Angle option, this would be a temporary change that reverts back when swapping to a different tool or brush, or a Brush Tool Modifer.

Some might wish to keep those orientation changes between tool and brush swaps, so that could be an option. Where the brush remembers/keeps the new orientation with a way to restore it to the default orientation.

Rotating and flipping brush is a nice idea, I remember this feature when I used pro motion and it go specially well Aseprite when using this custom brushes we get with ctrl+B. I vote for this feature too

I’ve find myself requiring this feature too, some quick keys to flip and rotate the brush would be really great (keys like V, H, and R would be perfect but those are keys for the tools).

Not sure how would be a nice UI for this, but is something we would like to include.

Not sure how would be a nice UI for this, but is something we would like to include.

I won’t pretend to know how complicated it would be to implement one thing just to alter it significantly later in case you come up with a better design, but my first thought was that you could add buttons to the toolbar along the top similar to when/where the Symmetry Options appear. A “Brush options” section where you could have a few buttons for “Flip H,” “Flip V,” “Rotate CW,” and “Rotate CCW.”
Hotkey wise you could map them to Alt+H, Alt+V, and… uh… Well something like that haha. Maybe Alt + the “,<” and “.>” keys for CCW and CW respectively.

I know Pro Motion has an entire menu dedicated just to the brush and allows for shear, rotate, bend, etc on the current brush. I’ve used that feature to made some good calligraphy brushes. I would think if he can implement Rotate he can also just add in the rest. 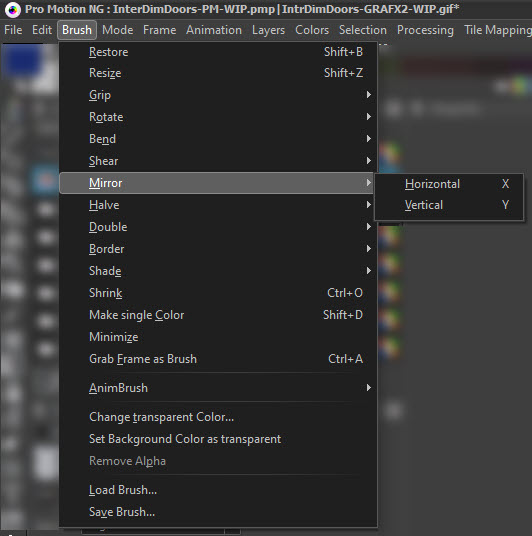 Hi! I use ProMotion. I’ve been using it for more than a decade. There are multiple things that are getting buggier and clumsier over time, and the developer isn’t particularly responsive. I’m looking to change over to Asesprite, but the fact that there isn’t a hotkey for rotating the brush you’ve just picked up is one of the basics that is preventing me from doing so. Looking forward to the day that changes!

This can easily be done with an extension, what options are you looking for? Also, what keyboard shortcuts would you suggest?

Here’s a demo of how the extension works, it adds new options under the Edit menu for rotating and flipping the brush.

Any input on this would be helpful, I’ll test it some more myself and probably release it next week. Should be helpful for anyone missing these features until native implementation is in Aseprite.