There is an option to do that in:

Bumping this thread because the existing options aren’t good for my usage scenarios.

My main use for layer highlighting is to better see what I’m working on against a possibly busy background. I need this to be easily toggleable so that I can quickly switch between previewing the full-opacity result and working with the other layers faded out.

The “Opacity for non-active Layers” is not only not toggleable easily during working, it also doesn’t particularly help with visibility in many scenarios. Since it also affects the background, it can even hinder visibility by fading out an otherwise flat background layer to show the transparency checkerboard pattern behind it.

Here’s an example from Tiled, which has a “highlight current layer” feature I find very useful: 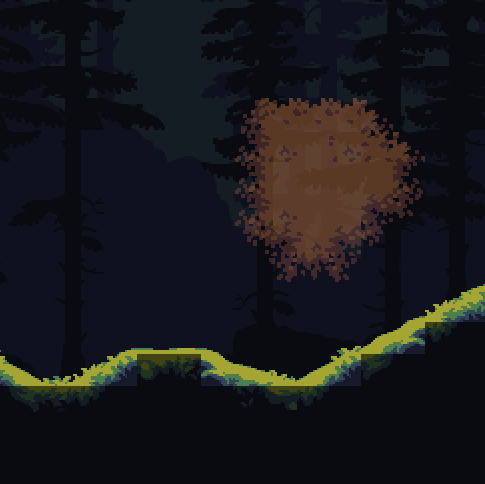 Note that the layers behind the active layer(s) retain their opacity, they’re just darkened (along with the background, which is equivalent to Aseprite’s Background layer or transparency checkerboard). Only the layers in front of the active layer have their opacity lowered (in this example, that’s the orange leaf clump), since they’re the only ones potentially in the way of the highlighted layer.
In Tiled, this feature is toggleable via keyboard shortcut and via the View menu. It also supports highlighting multiple layers at once, even if there are inactive layers between them.

I keep pressing the hotkey for this feature while using Aseprite :'D

there is an option to add shortcut for “switch nonactive layers opacity”.
being able to highlight more than one layer would be great imo.

Ah, I missed that, thank you! Still doesn’t really help me since for the work I’m doing, that option makes things harder to see rather than easier ;_; I really need that darkening. Until then, I have to either outright disable the underlying layers, or add a temporary darkening layer beneath the one I’m working on and toggle that.