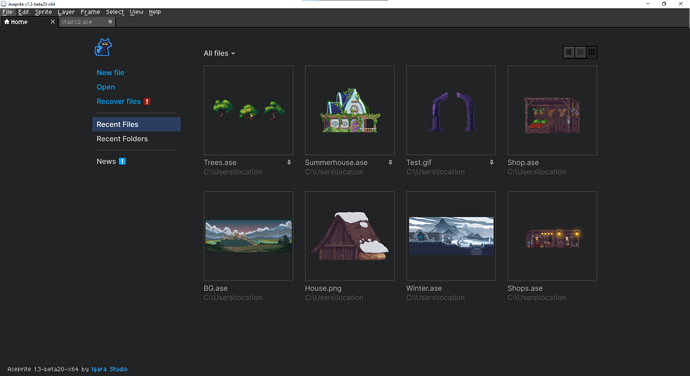 Some refreshing layout for the home screen may be more convenient and more presentable as well. Sorry for the non pixel UI. Created it in a hurry!

If you like it I can do more of it.

I’d love to see something that shows thumbnails like this, but still keeps recent files on the same screen as recent folders, somehow. Recent folders can probably be condensed to a narrower column than they are currently, and the thumbnails don’t have to be quite so large, so maybe it’s possible to fit three columns (menu, files, directories) within the full space, with Recent Folders split off into a separate page when the window is small. 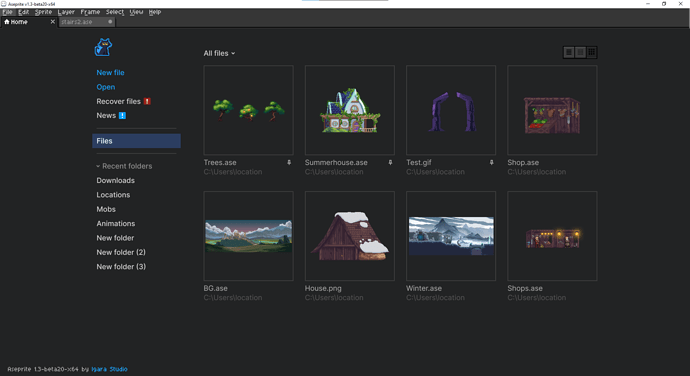 I think putting the recent folders under the menu gives off the wrong idea about how they work, makes it look like if you click a folder, its contents will be displayed in the main panel, when what it actually does is open an Open file prompt in that folder.
Shame, because aside from that, I think putting it there is rather clever (especially if the full path is included the same way as for the thumbnails - without the full path, the recent folders can easily become useless, as it’s fairly common for different game projects to have similarly named folders).

(FWIW, I don’t expect you to make mock-ups based on my feedback! Just voicing my concerns so that they can hopefully be useful if/when it comes time to design an actual UI based on the idea of having thumbnails in the recent files list. A drawback to including mockups is they make it very easy to accidentally stick too close to the mockup rather than focusing on the core idea behind it xP)

I agree. Many things here can and should be changed to the way developers see it

It looks great. Some years ago I though something similar after seeing Photoshop & Affinity Photo start screen.

A possible option for recent folders would be that after clicking them we start browsing those files in the home tab itself. And we can navigate each opened folder as a item in subtabs:

Looks cool. Like a File explorer inside Aseprite!
Just as I said there are plenty of options

While that would be cool, I like to use my OS’s native file browser’s features, so I’d like for that to still be an option.

On a vaguely related note: the Recent Folders list would be a lot cleaner if it didn’t include duplicates xP This is just silly: 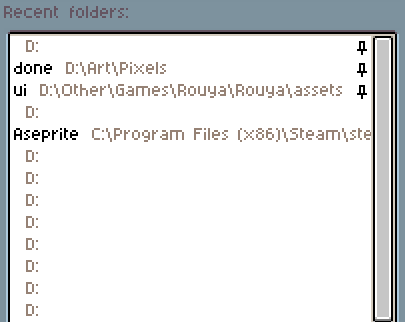 I would really love it if there were thumbnails, if I have to choose a file, I have to read through all of them to get to the one I wanted to select.