How do you delete a tileset?

I tried using this feature for the first time and currently astonished on how I can’t find how to delete existing tilesets on the internet.

hi, Dinir! you can either select tiles in the palette and hit delete or convert tilemap layer back to normal layer.

But deleting tiles will leave an empty tileset, and converting a layer that is using the tileset won’t affect the tileset either.

converting layer will affect tileset though? i’m sorry, i guess i don’t understand what do you need. any layer converted to tilemap will have a tileset of its content. if you delete the tiles the tilemap layer will be empty, you need to convert it back to normal layer first.

Converting layer does not affect tileset.

I made a set of screencaptures to help you understand the issue.

Left side is “deleting tiles”, right side is “converting tilemap to normal layer”.
None of both will remove the tileset. In fact, the tileset being intact even after removing the original layer would make things even more handy.

I just want to be able to remove a tileset when I accidentally created more than I need. 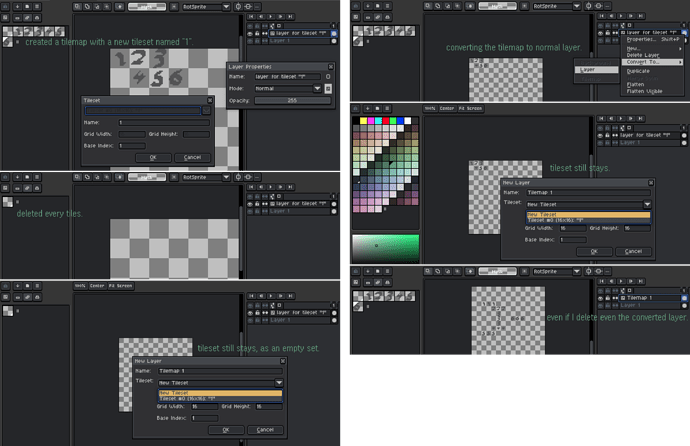 oh, i see it now! i’ve never noticed that when creating new tilemap there is the list of all previous tilesets. they get hidden when you convert tilemap layer to normal, but the tilesets are still stored in the file. interesting.

i’ve even tried to switch off “keep edited sprite data” and" keep closed sprite on memory" options, but it didn’t seem to change anything.
what does seem to do the trick is to duplicate the sprite. that action will convert all tilemaps into normal layers and remove any tilesets.(which doesn’t make much sense to me either)

I guess it’s impossible. Accidentally made another tileset? Copy the whole sprite file into a new one and rebuild every single tileset except that one. That’s the only way.

If something can be created but never ever be deleted, the feature for that is worse than not existing. I guess the only program that has an idea of tileset like this, has the feature that’s not worth existing.