How to select all cels at once?

I’m doing an animation and realised the sprites hands are on one layer. So I used the marquee tool to separate one hand out onto a new layer but of course I need it to be done across ALL animation frames. I drag to select and it looks like I’ve selected all the cels…but after selecting them and cutting the hand out it still only does it across one frame?

Really wasn’t what I expected the output to be…

I hope this gif helps you do it. If it doesn’t work you may either have a too old version of Aseprite (this is 1.2.17, but it was added quite a while ago at this point so you should be good) or you have the setting turned off in preferences. 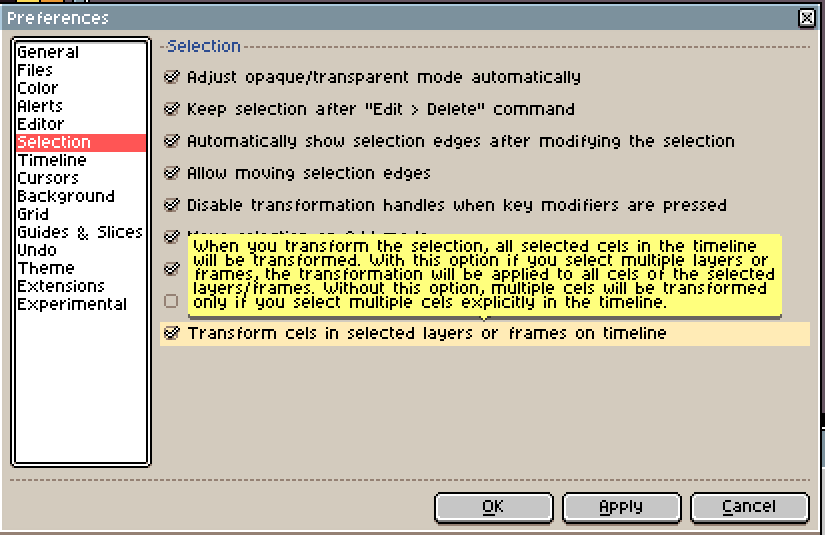 Here, it didn’t want to upload properly via the community page.

The action I’m preforming is to cut a selection into a new layer. “New layer via cut”.

In your gif attachment you haven’t created any new layers. My original problem was the hands were on one single layer and I wanted to separate them (left and right hand) into two separate layers, but across all cels.

ah i see, if you’re trying to separate them out then yeah you’re gonna have to do that manually.

There are tricks you can do to make it faster though but gotta get creative.

OMG that’s awful…a one second action turned into one minute…Since the whole point of Aseprite is that it’s fast that somewhat defeats the object.

Thanks for your help anyway but looks like I’ll have to redo it all again in photoshop…that’s annoying.

Are you sure it’s not possible though? Because I appeared to do it already on another layer with the arms…but I don’t remember how I did it. It didn’t copy the arm to the new layer, but it DID cut the arm from the original layer.

That at least saves some time because you don’t have to go through cutting every arm from every cel. All you need to do is past the cel on the new layer to every other cel. It’s a workaround but ultimately it is a bug that should be fixed.

@hasen actually the New Layer via Cut doesn’t work for ranges (yet), those commands that don’t work with range must be fixed. At the moment you can:

Yes I thought it was at least possible to do half of it as you describe, like I mentioned in my subsequent comment but I couldn’t remember how I did it. It seems it only works with ‘cut’ and not ‘new layer via cut’ as you say. Thanks.