Hi! First post from a newbie aseprite user. I’ve been pleased with the feature-set of aseprite so far.

So I bought aseprite primarily to work on tilesets/spritesheets for Tiled (& RPG Maker). My workflow has revolved around one frame per tile. This fits well with the animations workflow (each animation frame in its own tile), the “Export Sprite Sheet” feature (which places each frame in its own tile by default) and the “Tiled mode” feature (which shows how the current frame looks when when repeated).

It seems like the new “Tilemap layer” feature is incompatible with the frame-to-tile workflow. Rather, it requires each tile to be in a special “tileset” object. This precludes “Tiled Mode”, animations in multiple tiles and even drawing tiles with multiple layers.

Am I missing something? Frankly, I was hoping “Tilemap layer” would let me view frames/tiles side-by as I worked, letting me see how they line-up before exporting to Tiled. Is there, perhaps, a different feature that would let me work with frames side-by-side like this? Could this be doable with an extension? I’m a good programmer and would be motivated to develop such an extension if it doesn’t already exist and would be possible via extensions.

Thanks for any help you can provide.

The intended workflow is that instead of exporting frames to a spritesheet, you can export your document, which has your tiles arranged on it (pardon the ugly example): 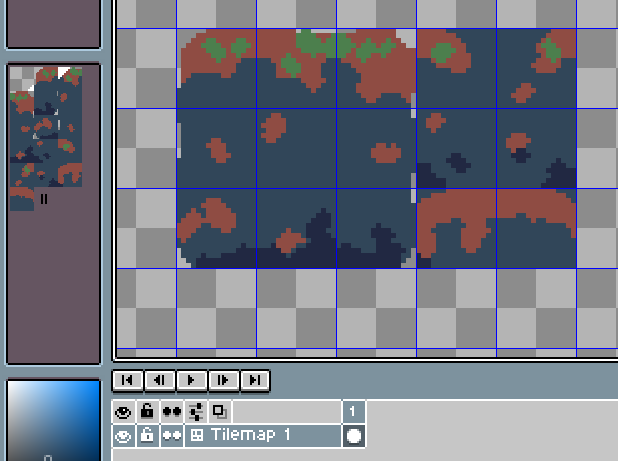 Since the feature is still in beta and is incomplete, it’s missing some important stuff:

I think once the ability to export the tileset is added, the others will follow.

Got it! A better work flow is in progress. I’m on board with that. My main concerns are that the tileset workflow lets you (in some form) (A) draw tiles with layers and (B) create animated tiles for water, smoke, etc.

EDIT: sorry, I was repeat-editing this post a lot for a few minutes there.

It’s unintended in that, until 1.3, Aseprite wasn’t designed with tiles in mind at all. It only worked for tiles because tiles can be treated as a type of sprite.

I would say that a better workflow is already here (if you export your document instead of exporting a sprite sheet), it just has some flaws in that you don’t have as much control over exporting the tile sheet as you do when exporting sprite animations, due to missing an Export Tileset feature. Most people export their tilesets without spacing and margins though, so it should be just as good for them.

I posted a feature request asking for better tileset management and layers for tiles before here, and based on the answer from dacap there, it seems unlikely 1.3 will have these improvements, but they are planned for future versions.

I didn’t mention animation there because it’s already teeeechnically supported via frames. In Tiled and RPG Maker, tile animations are just different tiles being displayed in a given cell over time, and you can do the same thing in Aseprite by changing which tile is displayed in a cell in different frames, and when you export your tileset, those frames would all just be different tiles. However, automating this in Aseprite the same way it’s done in Tiled (defining a sequence of tiles to show in each instance of a given tile) would be a great time saver.