Is there a way to create regular polygons?

Ive been using aseprite for a while. I thought I saw this in a tutorial sometime ago but I can’t figure out how to do it. To be more clear. A regular polygon would be one with the same length side on all sides. Like a triangle with all 60 degree angles or a square. a pentagon would have 5 72 degree angles and so on.

I’m assuming you’ve never found a solution? I’m trying to make a game based on hexagons so this would be incredibly useful.

If you’re willing to use Aseprite scripts, I wrote a tutorial that addressed how to make regular convex polygons.

The basic idea is to convert the number of points to an angle in 0-360 degrees, then convert the angle to Cartesian coordinates, in other words (x, y) pairs. Then, translate, rotate and scale the polygon. 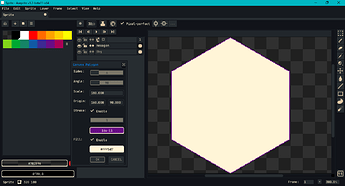 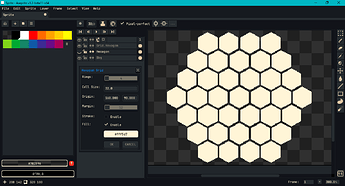 The complete scripts for both a regular polygon and for a hexagon grid can be found in this Github repository. You can probably just create one hexagon, then use the image as a template going forward.

The tutorial on Red Blob Games about hexagonal grids is pretty comprehensive if you’re making a grid for a game. It’s easier, imo, to create hex grids with decimals in your game engine than with integers in Aseprite, for reasons you should be able to see in the screen cap above. 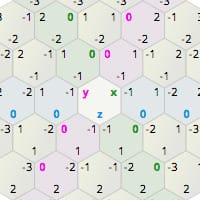 Guide to math, algorithms, and code for hexagonal grids in games