Is there a way to easily rotate objects and sprites without having to remake them?

Like, I make a sword based on how they do it in Terraria, is there a way to make it switch between obtuse, acute and perpendicular easily without having to remake it all?

Edit > Rotate and Edit > Flip allows you to rotate your sprite at 90 degrees increments and to mirror it. If you’re asking how to rotate it 45 degrees, it’s not possible to do automatically, but you can try doing it with the transform tool (Ctrl+T), while holding shift to snap it to increments of 15 degrees. Also set the algorithm to Rotsprite instead of fast rotation for better results. You’ll have to do some cleanup work afterwards and touch it up a bit, because no matter how good the algorithm, pixels aren’t meant to be rotated at 45 degrees.

Trying to do your suggestion, can’t move it 15 degrees 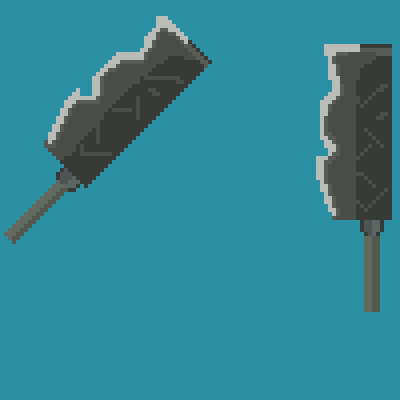 Suggestions? It’s not the same lengths and widths

What do you mean by “same lengths and widths”? If you’re talking about the bounding box, it shouldn’t be expected to be the same, since you rotated the content. If you measure the actual length of the blade across the screen with a ruler, they match.

I was sort of worried because the lengths of each part don’t seem to always match or correspond, particularly the scars on the blade itself

When you’re talking about details that are only a few pixels in size, you can’t always get perfect-looking transformations when moving from vertical to 45 degrees. This is where the manual cleanup that @BloodRaven0 referred to comes into play. You’re the artist, a human, and you know what looks “right” better than an algorithm does.

Yup, the result looks pretty spot-on. If something looks off to you, go ahead and fix it manually, that’s part of the cleanup. But it looks alright to me. You could make a spinning animation with those two and it would look alright. That’s a way to gauge how well your rotate worked.

Thanks, say, does whatever energy arc that comes with the spinning animation, go over the weapon itself or it’s before and after it?

This is for when I manage to make Pixel Sprites of 16x16, 32x32 and above and attach the weapons I’ve already managed to make to them

There isn’t really a way, that’s the nature of pixel art. Small details will get lost, and most details will need to be redrawn or adjusted.

If the size change is considerable (such as from the examples you posted to 16x16), you’re probably better off redrawing from scratch rather than trying to resize. Those sizes are small enough that it doesn’t take long to draw the shapes you need, and the real work is in communicating the details efficiently, which isn’t something you’re going to get from scaling anyway. Scaling will also likely give you subpar shapes and poorly legible details you’ll be tempted to stick with because they “match the original”, but starting from scratch will make it easier to make decisions better suited to the small size.

Problem with tracing off ones’ that the pics I get are like exported versions that are x4 the original size, so harder to just trace through