Hi. I’m pretty sure this feature doesn’t exist already, but I’d like to ask, just in case.

I realise this might be a pretty low-demand feature, but I have found myself in a situation where I would really benefit from being able to edit layers with different resolutions.(Ie to have editable layers at differing resolutions (similar to the reference layer, but editable.)

My use case is this: I’d like to make a pixel art comic, but I have found that even the smallest pixel fonts I can find are about 6 pixels tall. This is actually quite big and begins to dictate the resolution of the characters and the overall art style. Since I’d like to keep the pixel density quite low for my artwork, the text begins to take up a lot of real estate in comparison. It would be very convenient to be able to have my artwork at one resolution and my text layout layer at a different resolution.

I imagine this feature would require quite a lot of refactoring to handle operations that normally take place between layers. To make image export sane and rational, I would think the final output image would have to be the size of the most high resolution layer, and lower resolution layers would need to be a nice even subdivision of resolution. Perhaps the layers could be expressed simply as 1x / 2x / 3x etc… rather than allowing arbitrary resolutions.

I think for now I would need to keep my text layouts in a separate file, and import a scaled up version of the page artwork to create the final page.

You can get around this problem by planning your text, panels, etc at the native art size and then scaling it up to do the properly-sized text. If you need to know how big your text is to do your bubbles and lay out your panels, you can use the font at a smaller-than-intended size, so it won’t be quite legible while you draw around it. This workflow would mimic the way traditional comics are often done, the lettering is often a separate step in the process, with the artist working with rough indications of the text xP

There are also some ultra low-res fonts you could try. There are some quite readable all-caps 4x5 and 4x4 fonts, and some even lower-res than that, though they often have legibility compromises. There are also 3x3 and smaller fonts, but they rely on specific subpixel arrangements and thus would not be legible on other types of screens or zoomed in. (I personally find mixed pixel scales to be very unappealing, so I’d look at more fonts and unconventional ways of presenting the text before resorting to mixed sizes.)

@eishiya - Thanks for the ideas. I am also quite obsessed with “conforming to the grid”, especially in game development, so I might just end up going with speech bubbles that are excessively large compared to the characters.

The nuisance with working at multiple resolutions now is the need to work in two separate files. If you decide to alter the artwork you have to go back and reexport / import into high res your text layout file. Not too bad, but not ideal.

I’m sure I’ll figure something out, but I’d still love to see this feature in Aseprite one day if there is enough demand for it. (Perhaps it will evolve out of the “reference layer” feature.)

I was thinking about feature like that, but for a different reason. Having scan of hand-drawn a sketch in the background would help in pixelart-ing it in Aseprite. Sure we can scale it down, but small enough images will become unreadable.

@cremmy - You’re in luck, we already have that feature

It’s called a “Reference Layer”, and does what you describe. You can load a high resolution image and draw over it in a low resolution layer.

To add one, select Layer/New…/New Reference Layer from File 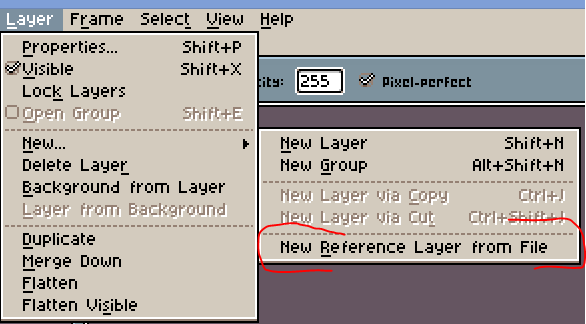 This feature used to only be available in the beta version but I believe it is now in the normal version (I’m on 1.2.15)