Whenever I export a png file it’s very blurry. How do I fix this?

Aseprite exports very sharp files in my experience, are you sure it’s not the viewer you’re using that’s making it appear blurry? For example, social media sites will scale your art up, blurring it. If you need to post your art somewhere where it’ll be scaled up, export it scaled up by some amount (Aseprite offers a pixel-perfect scaling option in the export dialog), so that when it’s scaled, it won’t be as blurred.

I’m sure, it’s blurry even in unity. I’m using pixel perfect, I have no idea what went wrong

It’s not just windows ten viewer, I put it in aseprite and discord and it was still blurry

Hello I see that this is an old comment but recently I am having the same issue, I am running a macbook air and after saving the file as Png and doing every single thing I could find through the community I can’t find the solution. It isn’t blurry when I view it in my visual coding but its after I add it to my photos app on my mac is when its gets blurry. Any suggestions ?

Sounds like the photos app is zooming in on your art and blurring it. Try exporting it from Aseprite with a larger scale factor, so that it doesn’t need to be scaled more. Aseprite’s scaling is sharp and well-suited for pixel art.

Okay, in sprite size or resize in the export file?

In File > Export.... If you use Sprite Size, you’ll modify your original document, which is not what you want in this case.

I was doubting my sanity. When everything i did, came out as blurry mess.

And all the tuturials just tell one to save it as png so its fine then. Which didn’t help xD.

Somehow it comes out blurry … always, as long as i don’t export it on 1000%.
Regardless of where i put it.

So i doubt its a win 10 viewer problem.

Just asking to myself.

Is there a way to get your pixel art images out there, without scaleing them up on export?
In a non blurry form?

Seems counterproductive, to have it be all messed up. Excpet you search for a fix for ages on the net xD.

If your pixel art looks crisp in the application at zoom 100%, the export to 200-600% should look the same, except bigger. A png exported from Aseprite won’t look blurry unless it was blurry before it was exported.

What you’re experiencing is most likely an issue with the Photo viewer or the program you’re using to open the PNGs. Try dragging your png to a Chrome window and set the zoom at 100%. That’s how it would look if you imported into a game engine or some other software. Try opening it in MS Paint, Photoshop, Gimp or Krita and at zoom 100% it will most likely not look blurred (that is if it looked fine in Aseprite).

If you manually scale the sprite before exporting (which you normally wouldn’t) you can scale with a bilinear algorithm, which is not suitable for pure pixel art. The default option is Nearest Neighbor anyway, which is the same algorithm used when you export at a different scale, and why it would never be blurry.

Visualization, as mentioned, is a different animal. If it looks blurry in Chrome, upload a sample image and we’ll probably check it and tell you what could be happening. If it doesn’t look blurry, there’s nothing to “fix” with Aseprite. It’s a matter with the image viewer program. I’d rec you try a different app. Some have neat GIF playback and transparency options though I can’t recall the name of any except for IrfanView which is extremely old and there might be better ones.

If you attach one of the blurry PNGs here we can see if there’s anything weird with the file.

I finally found the problem.

Somehow it didn’t do nearest neighbor.
After i switched it back and forth once.
Now images come out crisp as a potatoe chip.

Really weird. Because before i did that, only images that i scaled up to like 1000% were okay.
This is an original version with a 32 pixel base.

Thanks for the help anyways :D. This is way more fun then i tought it would be. Kinda addiciting, makeing your own tiles. Pretty basic but im still just messing around with it. 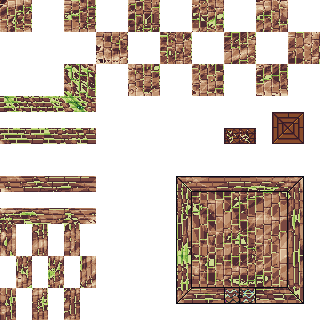