Question about importing PNGs for animation

I don’t have a sprite sheet, but I have the sprites in individual PNGs. Is there any way I can just group import them into one layer (as in frame by frame)? When I click and drag them, all it does is open them up in separate tabs. The workaround I found is to go to each tab and copy and paste onto the 1st tab but that takes waaaaay to long. Your help is appreciated.

This is what I do to import multiple images to Aseprite…

Indeed it does. Thank you.
In future updates, I hope they make this process a little easier.
Like, that little notice should pop up regardless of naming the files (it’s just nice to have this option).
Let us highlight a number of files, and then boom- pop up notice. If we didn’t name the things properly, let us organize and clean up our mess.
Also, what happens when I just want to import one sprite into the animation loop?

I hope this critique sounds like it’s coming from a right place (like intended) and not mean spirited.
It’s just…this program is rad as hell, banging on all cylinders. Only stumbling at the finish mark with this ooooone little problem.

After going through Aseprite’s menus, I just now noticed there isn’t an option allowing one to import an image (or sequence of them) into an open sprite document.

Unless this feature is hidden somewhere, it is rather strange that an option like this doesn’t exist already (either by menu, or dragging the image(s) from the desktop into an open Aseprite window like some other apps offer).

I’d like to see this feature be added as well, if it’s not already in the works. 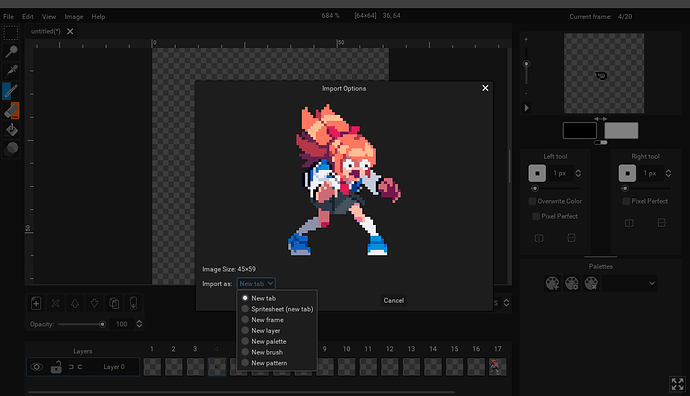