Resize sprite to a smaller value

Hi! I am working on some spritesheets for animation and I have exported them on a 372x384 scale for reasons. A few weeks later I had to change the sprites for another project, and I wish to rescale them back to its original 64x64 size. However, this messes up the pixels a bit in all frames and I have to do some rework (in the pic you can see a few scrambled pixels). Is there a way for me to resize to a smaller number flawlessly?
Thanksssssssss 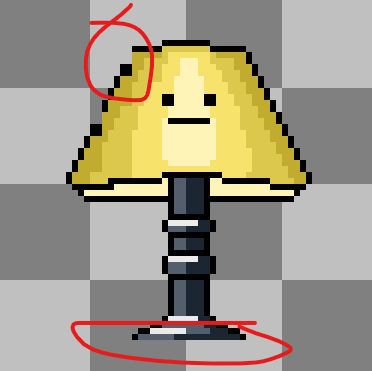 If your original scale was imperfect, then no, you can’t perfectly scale it back.

384 is 6x64, but 372 is not a multiple of 6, how did you even end up with that size? If you cropped it after resizing, reversing the crop and then scaling back down might work.

my original scale was 64x64, I had to resize to that specific size to implement it into unity for a project in which all the other sprites were 372x384 (no idea why, group project). I tried resizing it to 64x66 and some variations, but it still gets messed up