Rotating is causing distortion to the sprite (solved)

So I’m using Aseprite 1.2.16.3-x64 (steam download the latest updates) and it’s been a few days that I had this tedious problem:

When I rotate anything, in any angle, the rotated sprite will brifely hold its intented shape before starting to glitch and distorting itself;

Here you can see how,

It just can’t hold the rotated shape it is intended to have;
This is a small example but it works for bigger portion of sprites as well :\

The distorsion was caused by RotSprite, changing it to Fast Rotation seems to solve it! 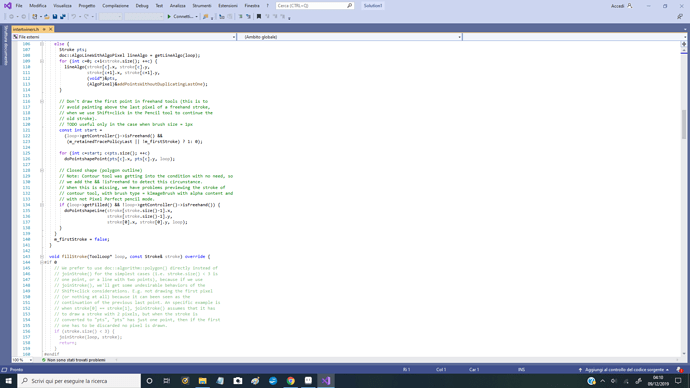 Aww man I tried to fix the codes but it appear that they were already fixed…
My problem still persist :\

I’m new to Aseprite (using version 1.2.16.3-x64) and this is the first issue I ran into; rotating the image makes it grow fur and lose its overall form. Another example:

Any progress been made on this issue? I’m not using a tablet like the person over at GitHub, so I don’t think that particular fix is relevant here.

Unfortunately that’s just how it is with pixel art. We can’t rotate shapes perfectly as there just aren’t enough pixels to maintain the shape. Even when you rotate high resolution images in for example GIMP or Photoshop there is still quality loss, although it’s not as noticeable as it interpolates the pixels to smooth it out.

This, but it’s made worse when compounded. Rotating an already rotated sprite means the program has less accurate “information” about where the pixels “should” be, and this compounds with every iteration.

@Paddy, you can mitigate the effect by not performing your rotation over and over to the previous rotation, but instead start from the original sprite on each frame and rotate the appropriate amount for each frame.

I actually came here to say that the dev advised me to do exactly that over on the Steam forums! Great minds think alike

Using the initial image as the “base” for all rotation steps does indeed yield much better, much more workable results. It would be great if the program had a way of doing this itself, but for the time being the manual method is a very usable workaround that saves a lot of time/effort by reducing the amount of retouching needed.

Thank you for the info/help!