What does v1.x-dev version mean?

Hey guys! Could someone explain to me what this v1.x-dev version would be? Would it be equivalent to v1.3-beta7 (most current at the moment) or would it be more up to date than beta, like a development release? I compiled it this week and the version that appears when I click “about” is v1.x-dev and I don’t understand which exact version I installed. Thank you in advance for your help. 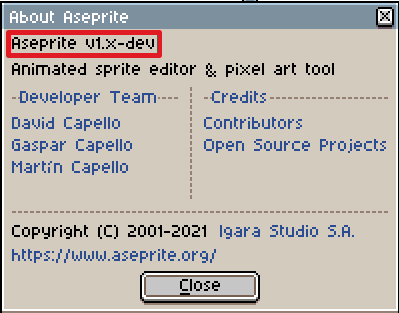 This is always the version number when you compile it locally from a git clone instead of getting it from the pre-built paid sources. It will always say 1.x-dev when you compile yourself the way it’s set up right now unless you go in and edit some build files yourself. This means you can’t tell from 1.x-dev which version you have. The way you tell which version you have is at the point that you download the aseprite source.

Edit: It looks like you download the release zips instead of git cloning, the version number is set. so downloading from the releases page is a good way to avoid this problem.