we have a new little version with several bug fixes here and there:

How to update Aseprite?

Since either this update or the previous one, every time I open Aseprite and then open a document to work on, the layer area is resized to minimum width: 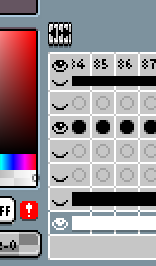 After I resize it to a usable width, it stays for the rest of the session even if I work on other documents, but returns to minimum width if I close Aseprite and reopen it later.

I’m guessing this is the same issue as 1.2.20 issues with timeline/onion skinning - #2 by KashouC

@eishiya yeah there is something wrong there, I wasn’t able to reproduce the problem yet, not sure if the settings is not being saved correctly, or the window being resized (if the window is resized the separator position is broken).

Could you confirm us what value has the timeline_layer_panel_width variable in your aseprite.ini file in the preferences folder?

You can try to open the file before opening Aseprite, when Aseprite is running and you change the value, and then when you close Aseprite.

Before opening Aseprite:
timeline_layer_panel_width = 12
Does not change when I resize the panel in Aseprite.

But then when I open Aseprite again, the panel shows up at the minimum width again, even though the file still says 115. After I resized it again (to 113), the value only changed when I closed Aseprite.
It’s possible it was at 12 at the beginning because yesterday when I was checking this stuff, I might’ve closed Aseprite without resizing the panel after seeing it, saving that value.

I’ll try to release a fix today or tomorrow, it’s strange that the it’s not taking the saved value

I’ll also note that there’s been an uptick of people asking how to fix this issue. So it’s more than an isolated case.