One animation tag has frame-A and B,
Can other tags have A and C? 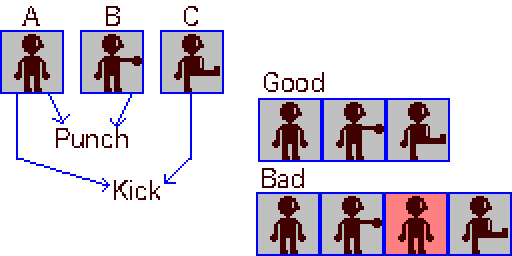 I referred this, unfortunately I couldn’t achieve.

Is there an option to reuse frame? Help

Is there an option to reuse existing frames in animation? If not, is it planed and when we can expect one? I need sprite sheet without repeating frames for my game. Right now export option is good only for pure animation exports, not for sprite sheets for games. Thanks!

Pardon my broken English, thanks.

Different tags can share a frame but you cannot have tags skip frames, the frames within a tag must be consecutive, as far as I can tell (I vaguely remember something about this in an upcoming update, so maybe that will change in the future). So, currently you can have tags for ABC, AB and BC, but not for AC since that would require skipping a frame.

Thanks!
I succeeded it using the ‘B-A-C’ workaround.

I couldn’t really understand the second method.
I make another frame-A(neutral pose), but I failed to export the sprite sheet excluding it.
I can export tags one by one.

I couldn’t really understand the second method.
I make another frame-A(neutral pose), but I failed to export the sprite sheet excluding it.

One more work-around would be to modify the exported animations either within your game, or prior to importing them into your game. For example, in my game, I have a certain animation that repeats a 3-frame animation a few times, and then transitions to another animation. Aseprite has no “loop N times” feature, and I didn’t want to repeat the frames a bunch of times, so I just tweaked the animation as read by the engine by hand so that instead of being frames [3,4,5], it’s frames [3,4,5,3,4,5,3,4,5,3,4,5,3,4,5]. The spritesheet is the same, the frames are just shown multiple times.
The exact way to do this would depend on your game’s animation system. In mine, I have a JSON file defining all the animations as sequences of frames (generated automatically from the JSON exported by Aseprite), so I can just hand-tweak that in a text editor.

Oh, I see!!
Adjusting the pixel arts or the game programs… I think you’re right.