Looking for the best solution to create a fast looking animation with afterimages such as this example: 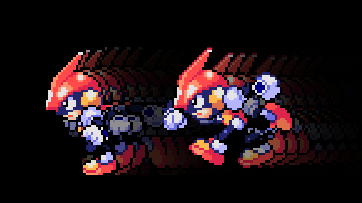 If it’s for a game, then the best solution is to do it in-engine, by storing the previous N frames and where they were drawn, and rendering them at a lower opacity. That’s how it’s usually done in games, as it’s more flexible and keeps the original assets simple and small.

If you need to do it for an art piece, then I think the easiest way is to make a few layers that contain your animation below your main layer, as many layers as you want afterimages, and then cut+paste all their frames over by one, and keep doing it by one more for each subsequent layer. Then, lower the layers’ opacities with the furthest-removed layer being the faintest and you should get this effect.

This approach works best if your framerate is consistent and relatively fast. If you have a lot of held frames, you’ll want to split them up first, you can use the Frame Rat script for that. This method is easiest if your animation is already finished, so you can mass-paste all these frames. If you want to preview this effect as you go, you can create your afterimage ahead of time, and copy the frames onto them as you draw them. Quite a bit more hassle.

This seems like something that would be easy to script, but I haven’t seen a script for it, I guess probably because it’s usually done in-engine rather than in the image editor.

Yeah its technically for a game but its more for like a modification. In short its just a mod for a game called terraria a 16-bit game. I was thinking about making it engine based but i thought a simpler solution would be just to include it in the spriting since it would be a easier process then coding it in possibly. Thanks for the help i will try it in aseprite first before i think about the coding aspect.

hi, Smokey! David Barker just released few scripts, one of which seems to do exactly what you want (ghost images) as long as you have an animation in the timeline, check it here: Aseprite Scripts Collection - #47 by David_Barker

Thanks for the Link Olga_Galvanova

Smokey, hopefully the ghost image script is close to what you wanted. Your sprite would need some sideways motion in the frame to generate images exactly like your example, but it should do the job.

Though… I could see a modified version of my script that took a walking/running animation loop, and created ghosts in a user defined direction (ie create a ghost every 3 pixels to the left), then you wouldn’t need to have the sprite moving in frame. I’ll see if I can hack out a variant like that too.

Now there’s also ‘Shift Ghost in X/Y Axis’ controls. So you can turn something like this:

Into something like this at the touch of a button:

sorry for late response and thanks for your script i will try and use it on a super attack im making for a character. Also i managed to just use the engine based afterimage effect ingame for one of my animations but for the next motion i will try to use the script to get more fancy visual effects.