How do I make 16x16 and 32x32 animations when the sprites are too blocky and simplified?

I can’t do it like Mr Mislav on Udemy does it, his sprites are more detailed and less blocky and I only figured out how to do the very basics of 16x16 and 32x32 sprites from him whereas everybody else advanced quickly

Smaller does unfortunately not mean simpler. The less space you have to work with the harder it is to animate. When you go up it becomes harder because there are more details to animate, which makes it more time consuming, but you have more space to do what you want to do. With super small sizes you should stick to super simple animations.

Also without knowing what exactly you’re trying to do it’s hard to say how to do it.

By Mr Mislav on udemy

Well, those are just bases. Unless you’re intentionally making stick-figures, you’ll want to get some colors and shapes involved. Simple ones will do for now, just define the shapes of the head, torso, front arm and leg and back arm and leg. I like to do it on separate layers, but this might unnecessarily complicate things. Use simple solid colors - brighter for the font arm/leg, darker for the back ones (I use front for closer to the camera, and back for farther from the camera).
Also, sprite size matters a lot. 16x16 is needlessly limiting, and unless you’re a pixel art god, you’re probably not going to make something you’re happy with. 32x32 is still small for a character imo, but it depends on what it is you’re doing. I’d go for a sprite that’s atleast 48 pixels tall, maybe even 64 (unless you’re size-constrained by a game engine or art direction ofc) 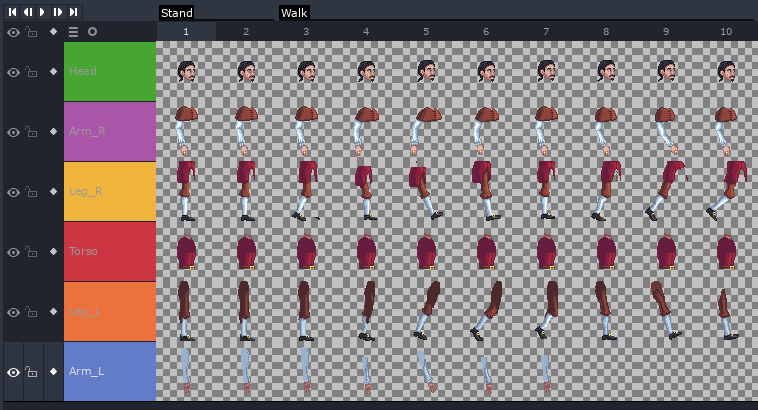 sshot-2021-01-26-02-04-02758×410 19.6 KB
Here is a screenshot of my layer setup for my walk animation. Granted it’s 126 pixels tall, but the same thing could apply to your case. I started with just solid color shapes that I rotated/changed/defined into the final thing. With this many pixels it was quite a lot of work polishing the shading, but if you go for a smaller size with fewer colors, it will be way quicker.
Here’s a link to my final result: Animated Characters for my Game

Also, this could be of use to you: Pixel Art Tutorial Dump - Album on Imgur

Thanks, TBH, I think I’m comparing myself to what everybody else on Udemy’s accomplished

I thought they would all be beginners and yet they advanced so fast, they can even imitate or make pixel art versions of very big and detailed backgrounds quite easily. Much more detailed compared to what was shown on Mislav’s vids as basics.

Thanks for pointing that stuff out

Also, admittedly, I’m doing stick figures because that’s the simplest I could do and what Mr Mislav showed for the basics, everyone else quickly evolved

Yeah, if you’re new to pixel art, characters, and especially animation is not really the place to start. I’d consider this advanced stuff. Try doing simpler things first. I started with items and tilesets for minecraft and terraria, these are very beginner-friendly.

I’m not the best at doing backgrounds to be honest, but do take a look at this:
http://danfessler.com/blog/hd-index-painting-in-photoshop
This is an ideal technique for backgrounds, but it doesn’t work in aseprite, you’ll have to have photoshop for this (it doesn’t work in gimp or krita either, since they don’t support filter layers)
That is advanced stuff though, so don’t worry if you don’t get it. If you want, there is a PSD file in there, download and play around with it, see if you like it.
The traditional way of doing backgrounds it a bit trickier, and as I said, I’m not any good at it, so I’m probably not a better source than the tutorials you are watching.

What about for drawing objects? Specifically weaponry?

Again, I’ll recommend looking at sprites, whose style you like and studying what makes them good. For example, you could download a minecraft texture pack whose style you love and look at all the items and weapons and how they are made, maybe even try to replicate them, you’ll learn a lot how their particular style of pixel art works.

Welcome back, friends, followers and foes alike! My life is a bit more busy now and this will really cut into my WoT time, but I'm back for the foreseeable future. (I have been working for some time already, but I wanted to establish the front...

Here is a terraria pack that has a lot of them weaponry bits. This is actually the place I learned pixel art. I joined in on doing sprites for this texture pack (around page 6 of the topic if memory serves right :D). When I begun I wasn’t very good, but I studied his style and tried to replicate it in my sprites (since the pack should have a similar style lol) and by the end of it, I’d say I had dramatically improved.

So yeah, download a bunch of sprites you like, open them up in Aseprite, zoom in and study them. How do the colors and shading convey the material and its shape?

Decided to do a semi imitation 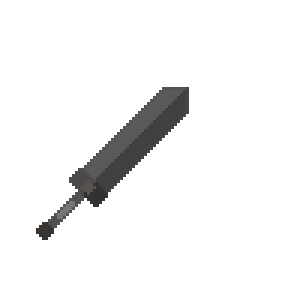 What do you think? I based it off Dark Souls III’s Greatsword

That looks like a great start. It depends on the style that you’re going for, if you want a grim-looking flat and simple style, then this is fine. But I think you can improve it further by adding more highlights and shadows.
Also, you seem to have used quite a lot of different colors that are very close in lightness and hue. Try to limit the amount of colors you have. And for borders, either use a really brighter colors, or, like in most cases people do, really darker colors.

Thing about highlights and shadows’ that I’m not sure if I have the space for it, closest I got for shading is basic

That said, I’m hoping to make Pixel Art like that of Death’s Gambit and Hyper Light Drifter and Dead Cells

Kinda brighter and not retro, basically