@BraidAcer 9 GB free ram available, firefox has 3 tabs open, one of them Youtube. Aseprite at 35 MB. 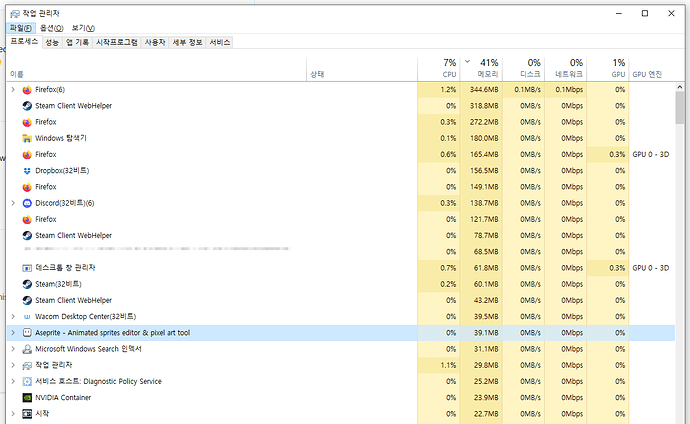 @Hepari00 just in case, I would like to know the exact version of the Wacom driver you are using (in that case I can give a try to it here).

I noticed that you run some 3D application in parallel, maybe that may cause problems too. Or not. Just a guess.

Just checked, one is Firefox and the other one is Desktop window manager.
I think it’s just indicating the graphics card in use, since I’m not running anything gpu-intensive right now.

That would be pretty stupid of me, to complain about performance while running something in 3D

@dacap @BraidAcer
So I’ve been using Aseprite for a couple hours today, and I’m not experiencing any lags…
Today’s only difference is that the pen pressure has stayed off the whole time.
I’ll keep working and give you an update if I start to experience any lags.

@Hepari00 was you experiencing this problem again? Today it was reported again here.

I haven’t been using it recently… I’ll file a report if I experience it again!
As I said in a previous comment, working with pen pressure turned off seems to reduce the lags. Were you able to find anything related to this issue?

Past week I’ve found some issues with some specific messages that are received from Wintab, and I’ve made some changes, not sure if it will fix this issue anyway. (Also trying to finally fix the “wintab direct packet processing” mode)

Today we’ve released v1.2.28 and v1.3-beta5 which includes some changes that might fix this issue. It would be nice to have some feedback to know if the lag was fixed in some way.

I wanted to confirm that this is still happening in 1.3-beta6.

I have to restart Aseprite every 30 mins or so to free up the memory. I was doing very little drawing (basically moving a bunch of tiles from Photoshop to Aseprite) and with no files open, Aseprite was using 2.5 gigs of memory after about 5-6 hours of use.

I noticed the lag while drawing/erasing and while selecting with the Marquee tool.

This may be related to the new tile systems, which I’ve been using a lot, but that’s only a guess.

Thanks @Shane_Neville for the info, I’ll take a look to the selection tools in case they have some kind of memory leak.

ur so right. it really doesnt matter with which u work with,mouse or tablet because in some period i ve used both, so lag started same for both but not after 10minutes after i start aseprite as some people mentions it but after some long work, with much layers and so on it starts lagging as hell, specially exporting and saving project file is horrible, even i have 32g ram

Hello, I have been noticing this issue recently too, I think the one I experience is the same as the one described here.

As mentioned by others, the lag happens when you move the cursor over the canvas with the pen tool selected - but the lag seems much more serious the more zoomed-out you are, and it is also more severe if you are drawing, though it still happens if you wiggle the mouse without drawing anything.

This has been happening to me when I stream to twitch while drawing, but it lingers after I end the stream. I dont notice any issue initially, but after about one hour of work, the lag begins. It is not just aseprite slowing down, the whole machine does - it affects my stream as well. OBS’s stats display show FPS dropping from 60 to 30-40 during a lag spike, and the “average time to render frame” value goes up to 10-20 ms.

Removing the brush preview doesnt seem to affect the lag at all. Idk, I thought it might - when you just move the cursor around, what else happens other than updating that cursor? well apparently something does!

Once the lag has set in, it seems like only a full reboot of the computer will return aseprite to running normally - closing both aseprite and OBS doesnt “reset” it, and aseprite continues to lag once re-opened.

I just fixed it for me - it turns out the solution really was to change the cursor - but it was not the brush preview that was the problem, it was the cursor crosshair. “Crosshair on sprite” seems to be the culprit. No idea why, it just seems to be a smaller cursor image? Is it being rendered in some weird way? Changing that to “simple cursor” seems to do away with the lag entirely, immediate change.

@FrancisCoulombe could you please tell us what version of Aseprite and what operating system are you using?

just want to add i have also been experiencing this. i am using a kamvas display and after about 20 minutes of drawing everything starts to slow down. i have to save all open files, quit and restart aseprite to continue using the software. i’m on a mac 11.6.2 aseprite v 1.3beta7

Just wanna throw my hat in real quick and say I’ve been having the same gradual pen lag as well, and when I turned off the “Crosshair on sprite” like @FrancisCoulombe suggested, the lag was immediately gone!
I’ve since sat with Aseprite idling for a good 15 or so minutes, and the lag hasn’t come back.

I’m using Windows 10 with a Wacom 13hd tablet, no other art applications have this lagging issue for me.

Just to inform you dacap that I tried this ‘simple crosshair’ cursor solution: It seems that it helps a little bit but it doesn’t solve the problem. When I use Aseprite long enough (several hours) then the memory consumption has grown from 50MB to 1GB and the program starts to lag. I hope that you have time to investigate this memory leak.

I’ll try to take a look to this issue, as it seems like it is a recurrent problem as only reproducible after using Aseprite for some hours.