so i been using the program for about two years now and i love it, but theres one thing that has annoyed me since the begginer and is what sops me from making my own palettes inside the program, and that thing is the way the palette organizes itself.
pushing the color around if you try to reposition one, ITS SO ANNOYING, before i could pass that because i didt mess with my palettes around but now with tilesets ,THE ORGANIZATION BECAME A NIGHTMARE, since everytime i try to push one part around everything else is reposition and to make something like this 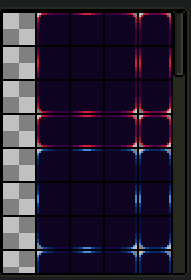 its hell i genuinely think i pass more time organizing the tileset “palette” to get nity and good to use than actually making the tileset, and i’ll pass even more time now since for some reason the tilesets remap itself alone and messed everything up, i cant be the only one wanting this.

so heres my suggestion, insted of pusing all indexes to the right for some reason, just swap the color/tile with the one you moved to, make the indexes itself static and only change the information around, i know that now it would be too much trouble but theres plans for a ui rewrite right @dacap, pls try to make this happen

also im gonna utilize this thread to ask for tileset searching with alt just like the palette.

You may use Tilemap layer to create patterns like ones shown. And then just copy from this Tilemap layers to any other of Tilemap layers, including ones that use the same tileset.

But I agree overall that by default changing (moving) colors or tiles indexes is not very good idea.

also im gonna utilize this thread to ask for tileset searching with alt just like the palette.

It works with Alt now activating Eyedropper tool. But don’t try to click transparent pixels of tile, because then it will select something else. This behaviour should be (hopefully) corrected as it was already discussed in some thread recently.

you got it all wrong by alt i mena alt scroll, that command will let you scroll trhought the colors of the palette
also even if changing the way the palette move may not be a good idea it still is a pain the way it is right now

also what you sugest is a workaround we need the power to swap the information of indexes around to help organize the way i show you, go ahed and make like three tiles like i show nad try to organize them

and one last thing, the metod of swaping would be much better for indexed art since if you move one color out of position everything messes up

actually I had some ideas to create an alternative 2D view of the palette (and tiles), so we could re-arrange colors (and tiles) moving then around. (Keeping indexes fixed.) I guess the “swapping” feature is an easy workaround to replace the content where the palette entries/tiles are dropped.

Still have to think about:

Basically the 2D view would be quite similar to an editor, but:

well its good to know that this feature is somawhat on work thoght, this is beyound me, but what about the tile scrolling feature, like we do in palettes right now

I don’t get what you call “scrolling feature”. Becuse I can freely scroll colors and tiles with mouse wheel now. And holding Alt does not change anything.

I click on color in my palette. Then press and hold Alt for at least 5 seconds. Nothing happens.

I think @Ethan_Buttazzi is talking about Alt + mouse scroll wheel to navigate colors by index. The same should work for tiles.

but it doest, and im asking for it.
edit: also i just noticed that i can scroll trhought the palette but it doest indicate which color i am like before, i restarted the aseprite and its working again but still is strange

Oh, you mean Alt + wheel over canvas, not palette. I see. Yes, I think it should work for tiles too, but it is not in beta3.