Still learning or trying to learn to do "Walking" animation

I decided to try and learn via other methods, but even I can tell they’re too simple

I came up with something that’s basically walking forward, but I think there’s much wrong here, not sure exactly what

I’m also not sure how to change it to “the sides” or show walking from the left/right instead of the front/back because of how the sprite is drawn, very big dude relatively speaking

This is the method I’m trying to learn via 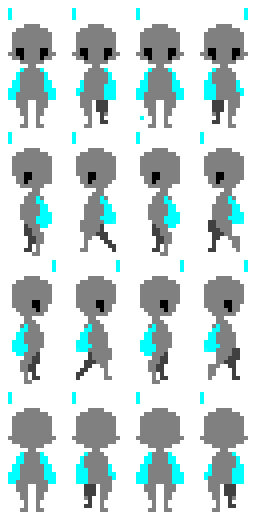 got it off pinterest, no name for the artist I could find

I’m not an expert but i would say your biggest issue is the shading on the legs, you probably want more variations of that to really show your char is moving forward rather then picking up and dropping down its legs, though its really up to your style and how simple you want. Another tip I would give is almost over exaggerated side movement, though I’m not certain if it would look good on a small character, you could probably get away with making it sway back and forth though while seeming to go forward to you.

Yeah that looks great, I would say It looks a bit more like a joyful jog then regular walking, depending on what you are going for with your art that might be perfect, but if you want to target realism I would say the next step is experimenting with how the animation looks as if it had actual bones and joints behind the skin, working with elbows and knees, possibly even hands or feet once you get the hang of it.

Okay, what about this?

I’m starting to get the Walk Cycle

I think that looks pretty good, the toe on the front foot moves up a bit too much looking a bit unnatural, but other then that the walking itself looks great. You might want to work on your arms a bit though, the back one seems to move behind the body in an odd way, and if you focus at the top before looking at the bottom the animation doesn’t seem to sync properly and almost looks glitchy. I can’t tell you exactly what to do about it but I would say to just test out how different arm angles and poses look in contrast with the legs moving.

Fair point, I think the glitch is around because the very first part of the walk involves it standing up straight and arms closed

That said, how about this, no arms but I think I’m getting the 16x16 stick figure walk

When one walks, hips move too. Don’t confine yourself to a rigid torso, it’ll only make understanding the walk harder.

You’ve still got glitching going on, like you’re accidentally reversing or repeating frames. Take your time to work this stuff out.

Also, threads seeking help with drawing should go in #artwork, not #help, this section is for help with Aseprite itself. You may want to edit the thread to move it (or, if that’s not possible, report it so that a mod can move it).

As my final comment I would like to give what i believe is the most important piece of advice in art as a whole. If you aren’t certain how to do something you can go to others for help, but at the end of the day what matters is whether you think your art is good. If you see completely no issues with something and you think its completely perfect then there is no reason to change it. If you don’t think something looks right just keep testing new things out and looking at other similar pieces and even photos and you will eventually figure it out.

To properly understand the positives, you need to live among the negitives

Okay, that said, I think I’ve been improving

I’m just trying to go with the super basics, and admittedly I was using the lessons for 32x32 for 16x16

Question, how do I quickly/easily turn this stuff into running? I think I just have to lean stuff forward and include moments where both legs are in the air

I have a simplified version of that pic, but its a stick figure for learning…I managed to get progress by not trying to imitate too much…legs get into each other in my earlier versions and the starting position for legs’ different from 1st to last

Say, any advice for non-human feet?

This one’s also messed up, but the original aim was for it to be like these guys

Machines, also known as Machine lifeforms, are a race of sentient robots and are the main antagonists and enemies of NieR:Automata. They were created by the Aliens thousands of years ago when they invaded Earth. It is the Androids' main purpose to...

Specifically the super basic ones that don’t really have feet, just weird pads

I’m now on the running bit, finally got the confidence to start trying, thing is other than learn forward and a brief moment where everything’s up, I’m not sure how to really do it

Thanks, kinda different from the walk cycle I’m trying to base off, but real simple, “contact” doesn’t need legs spread apart

Favor, comments on these attack animations?

Good idea, I’ll get onto that