In the throes of my beginner stages, I assembled various animations from an existing spritesheet into layers on top of each other. Is there a way to export each layer as its own GIF? The Export option lets you select a layer to export, but is there a script that will automate the rest (similar to the Export All Layers as PNG script)?

Pic related, I would want Idle.gif, Stand 1.gif, Stand 2.gif, etc. without the layers overlapping (so it would have to reveal and hide the layers one by one during the procedure). I searched and couldn’t find a script that did this. Thanks for any help.

welcome Tenome!
it seems to me there are two options:

I’ll try that, thanks. In the future, would it be better to have each animation as its own Aseprite file? I thought that would be cluttered hence me putting them all in one file. Lesson learned.

i guess it depends on your workflow, i have everything related to one sprite or asset crammed in one source file too. not sure if it’s a good habit or not. :]]

Made a script to display the total number of non-empty cels from visible layers. Or, in naive terms, the total frame count.
It’s ugly but it works.

Hi, I created script for perlin noise generation, that can be used for water/clouds textures. Scritp for generation of normal maps is in repository as well. GitHub - Ondra09/AseWave: Water/Clouds generation plugin for Aseprite editor

I’ve been toying with some scripts, just some simple bits and pieces that I put together for my own amusement.

They’re up on github https://github.com/davebarkeruk/Aseprite_LUA_Scripts

Hopefully they maybe of use to someone. 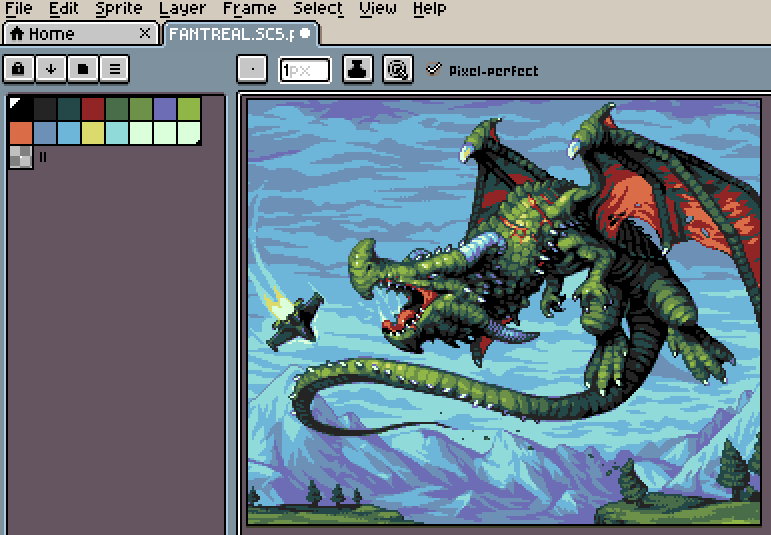 Hi everyone, thanks for all these scripts.

I’m having trouble finding one that does the exact thing I need, or knowing the terminology for it…

Is there a script that can scan an indexed color image and tell me if I’ve used more than X palette colours in a single pixel height horizontal line? I’m working on Amiga copper backdrops and have a 3 colours (+ transparent/black) per line limitation to work around and it’s surprisingly difficult to do it by eye. Even better if it could highlight the lines somehow?

You may edit value of MAX_COLORS_IN_ROW at 5th row inside script if you want some other max count.

Thank you so much!

… I don’t quite understand how it works, sorry! haha,. When I run it in file/scripts it pops up “All OK!” but i don’t know if it did anything… It says All OK! whatever picture I try it on? I’m maybe doing it wrong. I’m on Aseprite 1.2.27

Oh, I forgot to mention. You should prefix your layers with + sign or # sign for it to be checked. It checks all frames of all layers prefixed that way.

That’s going to speed me up quite a bit, thankyou!

非常感谢，我在为自己的游戏项目写一个lua脚本用于导出图片和数据的时候遇到了问题，在参考了“Export sprite’s layers as individual images”中的lua脚本后，我解决了我的问题。我向此作者表达了感谢，也感谢你的整理的列表。
Thank you very much. I had a problem writing a Lua script for exporting images and data for my game project. I solved my problem by referring to the Lua script in “Export Sprite’s Layers as Individual Images”. I express my thanks to the author and thank you for compiling this list.

I just made a helpful color range selection script. It lets you select colors continuously instead of one-by-one like you had to do with the built-in tool: select-> color range.

I’m calling this one SCMRSN (pronounced “Scrimson”) and plan to release a CRMSN version later.