Today we are releasing the new Aseprite v1.3 which includes more than 3 years of work

You can get Aseprite from http://www.aseprite.org/ (remember that your purchase includes a Steam key, then you can switch to the beta channel to get this update) 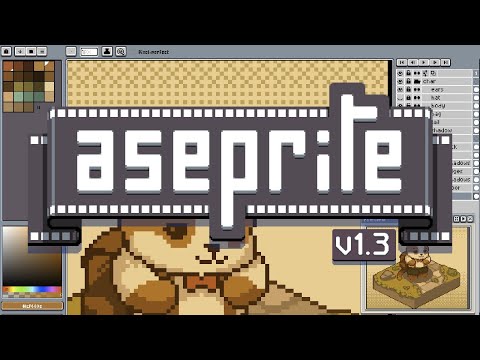 Available in the beta branch from Steam and all distribution channels.

Praise be! I’ve literally been procrastinating so many projects for so long because I knew I would just hate working on them without the Tilemap palette. Brilliant work. You guys are incredible. Thanks so much!!

Super cool! I’m starting to test all the goodies =)

Is this good enough to do commercial works? I mean, no bugs.

Hi @Isitpossible, it’s useful for commercial work but there are bugs and crashes yet (the data recovery feature should work), but I would recommend you to save your work often and in the cloud (e.g. in a Dropbox folder).

Selected tiles on Tilemap layers should be transformable (rotatable/sizeable/skewable) just like normal bitmaps. In fact they are now, but not with mouse, but only with text fields and ending results are odd — it duplicates edge tiles which could be helpful in some cases and not helpful in other cases.

At the moment in Tiles mode (

), the selection can be resized as a 3x3 rectangle (it works like a 9-slices area in some way). The only way to transform tiles correctly with rotation/skew at the moment is (or should be) in Auto mode (

Eyedropper tool on Tilemap layers in Tiles palette mode is not too friendly when tiles has transparent pixels. When I click on transparent pixel it selects Empty tile instead of correct tile or anything behind tile as could be suggested.

it was changed as it is when editing big tiles (and multiple tilemaps) for the Move tool mainly, but I think it makes more sense to pick the tile even in transparent colors when you have only one tilemap layer.

I’ve been looking for this feature (as mentioned by @Switch_Z ) too. I’d love to be able to save my named tilesets the same way I can save palettes to their own files.

I’m sure there are lots of ideas and plans in the works, but without extensive knowledge of what all of those might be, here are some feedback suggestions that spring to mind after my first day using it.

I imagine the tileset name given in this dropdown box… 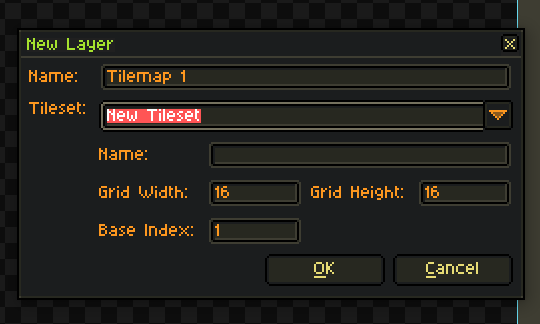 …should be displayed in a similar dropdown box directly above the tiles palette. Then you could switch tilesets very easily. It could have its own version of this flyout menu…

… So you could freely save, load, access, and switch between existing tilesets in any project.

I’ve made a mockup here. The first 2 are minor UI variations of the above ideas (the first with connected buttons, the second separated), and the 3rd version also moves the tile buttons down next to the tile palette, which isn’t a loss for space but does, in a way, make more sense (at the cost of some visual elegance). The third version also shows off the addition of a save/load menu.

I’d love to know what you guys all think of these ideas.

1.3 first beta just release and people are alredy asking for more features, i see its pretty rough
also i tested the “create palette from current sprite” and the octree method is working wonders, 1413 colors without one missing, thought when i try to switch in advanced option to “default(choose best option)” it crashes
one last question thought, why octrees cannot store alpha indexes?
that was all, i wish good luck to the team there and try not to crunch

Awesome! Can’t wait to try it out. Thanks

Indeed, a feature to be able to save a tileset would be great. Altough I suppose one could just put manually all the tiles on a layer then save it as a png, but it’s additional work.

There are some changes (mainly to handle tilemaps and tilesets), still undocumented (you can see an example here)

Not yet from the UI, we posponed all this to do the release ASAP, anyway there is a script available to export all the data (you can customize it to export only tilemaps/etc): GitHub - dacap/export-aseprite-file: Little Aseprite script to export the data inside a .aseprite

Anyway we are planning to add the export feature in future v1.3 releases.

That’s right. We preferred to release the version as it is (in the simplest form) and start hunting bugs now and get some feedback from the community. Thanks for the mockup (the list of tilesets at the moment is in the layer properties dialog, but it cannot be changed, also an idea we had is to list all tilesets in the sprite properties to re-order them, still something to think about the UI).

also one thing that should be added here is the ability to create canvases by tiles, insted of creatinga canvases in pixel only.

for example lets say i want a canvas with 32 tiles wide and 16 tall, each tile being 16x16 in size, that would equate in a canvas 512 pixels wide and 256 pixels tall

insted of doing this bunch of math i think we should be able to input the size in tiles direcly like i want 32 tiles vertical 16 horizontal, ok.

this update is great! the skew transformation has been a lot of fun to mess around with. I’ve just been having one issue, how do you use the eyedropper on the desktop? am I missing a new button or something?